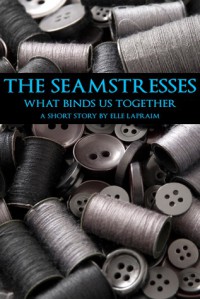 The Seamstresses is a very short tale of two sisters who find themselves in a bizarre afterlife.

Elle's look at what our 'afterlife' might look like, is one that raised a few questions for me. The two sisters in the story had been seamstresses in life, and also, as it appears, in death. What would that mean for each of us?

Is there something that I could do in the afterlife? I write stories and read, perhaps it could be my job to rewrite people's stories?

Anyway, given the story is but a few pages long (18 or so), it leaves little time for character development so you just have to go with it. This isn't a bad thing because it actually gives you the opportunity to think about the story instead of focusing on the characters and why they're doing what they're doing.

I wondered if there was some symbolism in Yin's (our protagonist), name. I wondered if her sister was called Yang?

The story possessed a great duality to it and finished with a very important note to the reader.

Considering this one is only $0.92 on kindle, try it out today if you want a quick, interesting read.