The book had a fantastic idea, saw the potential to be really ‘out there’, but drew back to safer ground. 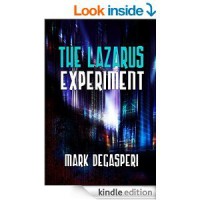 What to say about The Lazarus Experiment... Well, I was left a little underwhelmed to be honest.

I read a couple of the other reviews before I started reading, and the mention of adult content made me keen to see just how it was going to be handled, but I wasn't sure how it would fit in.

As it stands, adultery at the best of times is a tricky business, and I thought Mark managed the lies and duplicity well. The realness and confusion caused by Jonathan's lack of memory also worked well, but that in itself caused issues when reading. The reader cannot trust Jonathan's narration. The reader is exposed to Jonathan working through the lost year of his life. The reader learns of these memories with Jonathan, which allows a connection, but the confusion and disorientation tears that connection.

The memories were a good tool to provide the information the reader and Jonathan needed, but they didn't feel real enough to me. I'd have liked a bit more emersion more sensory information, more vivid imagery. The memories felt muted, which could have been intentional… but if it was, it felt as if the memories were lacking in substance.

The twists at the end were in a way both expected and unexpected. Some of them were obviously bound to happen, some not so much. They were a long time coming, and it did make the book drag a little. A few more breadcrumbs throughout the book would help here… perhaps some memory snippets, or Jonathan being drawn to a specific smell or sound or something. I think that’d encourage the reader to think things through more thoroughly, make the connections (even the wrong connections if desired) it’d make the book more immersive and engaging.

Firmly in the sci-fi genre, there are aspects of thriller and even a few small romance-ish themes. The mystery of who killed Mitcha, who Jonathan can rely on and how, if at all, Johnathan is implicated in the murder and fire at his lab, all tie in to create a story that grips the reader and makes them stay reading until the final pages.

The writing was well constructed, with minimal editing issues, a few I noticed are mentioned below, but generally it was well written. Ultimately I felt the book had a fantastic idea, saw the potential to be really ‘out there’, but drew back to safer ground. This is where I felt let down by the book.