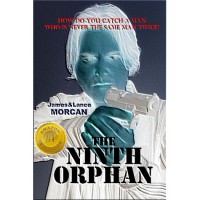 Did any of you ever watch the TV show ‘The Pretender’? Am I showing my age there?

Why I’m referring to the good old late 1990s TV series is because the second I read the blurb for The Ninth Orphan I thought of one of my favourite TV shows as I was growing up. I loved the idea of being able to become another person; I was intrigued by the concept that someone could change their personality, habits, voice and all other aspects of themselves to become this other person. It was like watching a human chameleon at work.

And, that is essentially what piqued my immediate interest in The Ninth Orphan I could see similarities right from the word go. These similarities did continue throughout the book, but there were plenty of things that differed too.

The writing was fairly mature, by that I mean, the plot and characters were well constructed and carried the reader through the story at a good pace, the story was complex and had multiple sub-plots running throughout the story which were realistic and sneakily brought in additional information that later became important but at the time you didn’t realise that it was.

Where things fell over a little, there was a lot of repetition of certain facts (e.g. ‘he was never the same man twice’ and ‘crossing in the Philippines’) this continued throughout the book and it did start to grate on the nerves a little.

There were also a couple of times in the book (I took particular note of 24% in) where there was some head hopping from Nine (who we’re mostly focused on) to others in the story. This wasn’t done a lot, but occasionally we got an alternate view and it throws off the reader because it can be quite jarring.

The main issue with this of course is that the reader is given information about what other people are seeing/doing/thinking when they’re mostly dealing with Nine. I think this was done to give the reader context but I think there would have been other ways to do this.

I was even less enthused about the very obvious plot twist that became the driving force throughout the story, but I guess it was needed even though I’d wanted something a little more ‘out there’. Probably the part I liked the least was the epilogue. I didn’t think, as a reader, I needed to know all that information yet I am in two minds about the epilogues purpose. I think perhaps it was useful, but it was taken too far and too much was crammed into it. I probably would have stopped after the first description (sorry for being cryptic! I don’t want to have spoilers where possible).

If you’re keen on spy stories, international espionage or conspiracy theories, give this fast-paced book a try! I doubt you’d be disappointed.