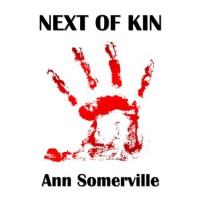 The first thing that you will notice about 'Next of Kin' is the change in narrator. Instead of Nick telling us everything, we get to delve into the character that is Anton.

I'm not sure if this was simply because of the direction the story went, or if the decision was made before the story unfolded, whichever it was, I enjoyed the change if pace. I always liked Anton, now even more so.

In terms of plot, I think Ann stretched this one to breaking point. It was complex, internationally based and risky.

Unlike the first two installments, I felt the passing of time in this one, I am not sure if it was because of pacing issues, or the lapse in the storyline. But, whichever it is, I didn't like feeling the weeks drag by for Anton and Nick.

I felt like some of the trains of thought were a bit tenuous, some of them, leaps of faith and a little too obscure to be the first, second, or third leads.

I liked the bigger roles for the supporting characters in this one, it gave them more dimension.

Once again, the romance, love and support between Anton and Nick was quite nicely done. Probably the least graphic, this time also includes a hefty dose of sweet and fluffy.

All in all, not the best ending, but books 1 and 2 would be hard to beat!

*Note: An electronic copy of this book was provided to me in return for an honest review*
Tweet