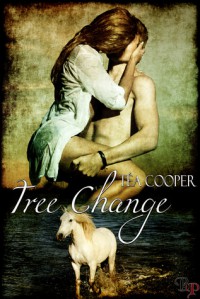 Tree Change is, when all things are said and done, a sweet romance story about two people who have an obvious chemistry, despite trying to keep themselves apart.

The first 25% was lovely. You got introduced to Cassia and Jake, you got to see Sydney and the South Coast through their eyes, the beauty in both locations despite them being striking opposites. I enjoyed the physical description, the uncommon use of groken glass to describe Jakes eyes. I loved that it was very vivid.

I too, loved the amazing and often rather amusing banter between the two, verbal, mental and physical. I loved being taken along for the all consuming ride of barely controlled lust and love that they both felt.

The incident that drove them apart was a different matter. While I can fully understand the situation, I don't believe that someone who was so in love with another could have continued along that path for so long. I think it was a valiant effort to give the reader insight into the characters, but in this instance I think it actually caused me to dislike them.

From there, things fell apart. I was very frustrated with the to-ing and fro-ing of the emotional state of both main characters. I know that this sort of thing would happen in real life, but I felt too much emphasis was given to it. It seemed to drag on way too long.

The last 10% of the book seemed extremely disjointed from the rest. I believed based on my initial introduction to Cassia and Jake that they had been together for a while prior to the split and that they had lived together and knew each other very well. They seemed able to 'read' each other well.

What bothered me with the last 10% of the book was the warring themes, the sudden acknowledgement of hidden past hurts and truths versus the clear 'knowing' of the other person's inner most workings/longings/desires. I was so utterly confused how someone could know another person that well, but not know certain things about them... certain BIG things. Certain things that you wouldn't keep from someone you love.

On a positive note, I saw no typos or errors. Great work on that Tea.

**Note: I was provided with an electronic version of this book in return for an honest review**
Tweet