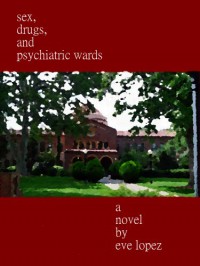 I still don't really know what this book was about! It felt like I was reading about a drunken, drug induced sex party... Oh wait... I was!

There was a lot of graphic sex and drug abuse in this book. A lot of 'partying' it seemed to all blur into one and I found it all rather dreary in the end.

I didn't like Lucy at all, the main character of the story should be one that people relate to, or at least like, but she was one dimensional and shallow and rather boring unless she was on drugs or drunk.

I don't think this is a good book for young people, it glorifies the drug abuse and flagrant sex and alcohol abuse and puts it in a light that almost makes it ok. By no means is Lucy's use of these substances a good thing, but she has so much 'fun' while using, it could come across as promoting it.

The supposed mental break downs were just an excuse for Lucy to act completely mental, none of it made any sense, the emotional side was all wrong, I didn't like this at all. I thought that Lucy came across as completely out of control, and the handelling of this by her friends/parents/doctors was wrong. A number of times throughout the book I was left wondering if this person (Lucy) would even be allowed to be on her own. I know I would have stepped in and done something if she were a friend of mine.

I don't live in the US, perhaps this is part of the reason why Sex, Drugs and Psychiatric Wards didn't work for me, but I'll give Eve this, she didn't mince words with the title. That is exactly what you'll get in this book!

I wouldn't recommend it. I don't understand the high reviews for this book, unless that's the sort of thing you like to read, it put me off completely.

Also, this book could do with a look over by an editor, there were a lot of small issues (but I was too annoyed at the book to note them down). Sorry Eve, just not my thing!

**NOTE: I receieved a copy of this book from the author in return for an honest review.**