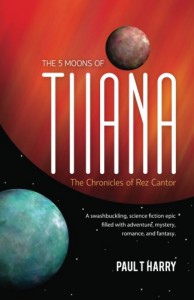 To start, this book took me a long time to read (probably the longest ever without me stopping and adding the book to my DNF shelf). To explain why I persevered, it stemmed from my appreciation of Paul's brilliantly complex ideas. I can just imagine the level of creativity that was required to create this vast storyline, the characters/worlds and plot points were so varied it often felt like someone different had written each of them.

I loved each of the individual worlds/moons, the good guys and the bad guys. I really just can't say how much I think the ideas behind this story are so incredibly awesome.

Where things got bad was with the actual writing. Now, I didn't pick up flaws in the basics of English, Paul has a good grasp on that. Where I had concerns were things like pacing - at times it was choppy, either too fast or too slow and it felt like the reader is rushed through things.

There were times when the main character had assumed knowledge that really shouldn't be assumed. Things were coming across as too easy for him. He had times where he seemed a little uncomfortable (or if it was meant to be huge discomfort it wasn't articulated well enough) then quickly finds a solution.

It often felt like you never really know many of the main characters (with the exception of Rez) because the important things were brushed over, to speed up the excessively long timeframe of the story. An indication of what I mean here - at 30% of the way through the book already 3 years had occurred. A bulk of this time was skipped over and no real information was provided. It was like two completely separate ideas had been hastily sewn together by a bridging event that wasn't really important. If it's not important, don't mention it, find a better way to bridge the two ideas and make it mean more.

At the same time I did have concerns around the mental processes of Rez. Things that I felt should be at the front of his mind were weirdly missing and that made me wonder what was going through his head.

Throughout the story, you do get to know Rez, the way his mind works and how he reacts to things, which is why; at 94% through I was completely floored by a huge shift in character for him. My notes on that section were this: are you an army man or a snivelling wuss?

Ultimately, I only liked this; the ideas just couldn't lift the issues I had with the writing. However, I would still recommend this book to sci-fi fans who aren't as critical of the writing as I am. If you want a story that will grab you and take you half way across the universe, this is for you.

**Note: I was provided an electronic version of this book in return for an honest review**