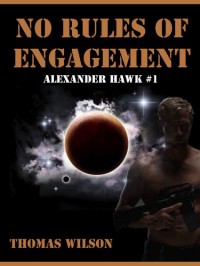 What can i say about 'No rules of engagement' that will encourage you to read it?

.  Not as polished, not as exciting or well written, but the general idea of it was there (aliens, space fighting, lots of children dragged across the universe to fight an adults war... you get the gist)

My main issues with this book were the editing within the .mobi version I got from Smashwords, there was a point approx. 58% of the way through (Where he's quoting from the bible) where the text colour changes from black to this lighter grey and I seriously thought that my kindle was dying for a second until I opened another book and confirmed it was just this book. (FYI, it continues all the way to the start of Chapter 19).

Other editing issues included missing words, incorrect use of words, or mixed order of words in sentences.

they said it was a standardized test. First the questions were way to hard, and then... Missing the second o in too. Similar instances included it instead of it's, your instead of you're, except instead of accept and the list goes on. These just added to the many, many small but noticeable and quite frustrating editing/spelling/grammar mistakes. 1 full star lost to that.

I also had huge issues with the POV changing from first to third person mid scene, hell, even mid sentence!

"Please give it a try, Sir." Captain Bratten said to me as he held the door open to one of the balls. Alexander climbed in and shut the door.

Editing and spelling issues aside here, probably the most disturbing thing about this book is the age of Alexander and the very adult situations he was portrayed in. Tawna's review (http://www.goodreads.com/review/show/...) outlines pretty much every problem I had in relation to his age and I agree with her that if he was just a couple of years older this issue wouldn't be so bad.

i'm sorry, but the fact that a 10yr old is discussing having sex with his girlfriend is more than a little disturbing, even though it is a work of fiction. This along with the annoyance at the editing and POV changes really ruined what could have been a decent story. Thomas, I would consider either making Alex a bit older or laying off all the sexy stuff with his girl friend until he's at least 13-15.

The bible stuff didn't thrill me, but then I mostly skipped over that while reading as I didn't feel it added anything to the story, in fact it probably made me dislike Alexander even more, he is rather disturbing in how one minute he's super kid extraordinaire, the next he's just a mean kid who likes to bash up anyone who touches him...

I could have really gotten into a bit more information about some of the other main kids that stepped into the other major roles, Intel and Kirk etc and less simulations, or at least more interesting ones.

Sorry Thomas it just didn't do it for me. It was a struggle to get through some of it, I won't be reading book #2.

**NOTE: I receieved a copy of this book from the author in return for an honest review**