If you’re a hard-core sci-fi fan who loves space ships and alien encounters, then this book could be your new favourite 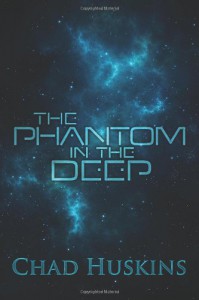 The Phantom in the Deep is probably the mostsci-fi-ish, sci-fi book I've ever read.

This is why I found it more difficult to read than I had expected. It wasn't that the language used was all that difficult, but it was rather high-level science. It sounded like astrophysics 101 crossed with an in depth analysis of the anatomy of aliens and space travel crossed with a game of chess all rolled into one.

This isn’t a bad thing.

But it does make it a little harder to ‘get into’ if you’re not one of those people who live, eat and breathe this sort of stuff. It might be too high-level for English as a second language readers, or readers of generally easier texts.

Chad did well to explain the theories, ideas and complex situations and navigation through space in a way that did actually make sense; it just took my brain a little longer than I’d have liked to get it.

Where I felt the book was let down was:
1. The slower start (this was always going to be difficult, especially when there is only one character in the depths of space on his own)
2. The long instances of inner reflection of both Rook and the Cerebs
3. The kinda weird ‘narrator’ I think the story could have been told in a more clear (probably a bit more segmented) way by breaking the scenes between POVs.

Despite these points, I enjoyed the story. It was rather unique and I can certainly appreciate the level of research and time that would have gone into creating a more accurate representation of the science within this sci-fi story.

The ending, well that certainly was worth the wait. Where the beginning was a little slow and, dare I say it, boring… the ending was anything but. It provided a creative and exciting closure to a complex story, but also allowing for a continuation for book #2. Very difficult, but well handled.

If you’re a hard-core sci-fi fan who loves space ships and alien encounters, then this book could be your new favourite. If sci-fi isn’t really your thing and you prefer a little less intricate science with your space travel, I would steer clear.

This would have gotten 3.5 out of 5 if Goodreads allowed half star ratings.

34% - ...has ever accomplished can even gained (gain) its attention.

79% - Partly to himself is repeated twice.


**Note: I received an electronic copy of this book in return for an honest review**