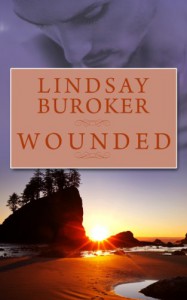 Wounded is a short, reasonably sweet romance with strong mystery ties. It's also the first of Lindsay's books outside of her usual fantasy/steampunk-esque genre that I've read.

The sleuthing protagonist, Tara, reminded me a bit of Lindsay's most awesome character, Amaranthe (from The Emperor's Edge series), but outside of that, the similarities were few.

The 'wounded' love interest was quite nice to look at (or read about) and fit the bill for the story quite nicely, but I was expecting some of Lindsay's usual quirkiness. This wasn't apparent. I did enjoy the rather intriguing job history though. Lindsay taught me a few things in this book.

The dialogue was Lindsay's usual witty banter-like style, which is always a pleasure to read. I enjoyed the barely veiled flirting and sexual innuendos that were sprinkled into the story.

The mystery/thriller story was a bit strange. It worked, but it didn't sit right. I also felt it was quite rushed at the end.

I didn't really see why the book is called Wounded, it doesn't seem to fit the story in my mind. I thought something suitably geekish in the mushroom field could have worked better, especially if it were to be used as a bit of a joke in the story.

The editing in my version was a little less polished than Lindsay's usual books, but the typos didn't really subtract from the story.