It is a great book, but it needs the reader to be in a certain frame of mind to really get into it 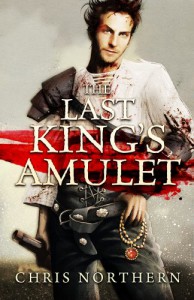 The Last King's Amulet trails Sumto through a rather tumultuous time in his life. It sees an adventure of personal growth begin in a fantasized version of Ancient Rome and move through a war-ravaged countryside.

It explores a world of barbarians, battle mages and magical healers and mixes it with a healthy dose of political and economic strategy. Perhaps not for everyone...

Sumto was not a really likeable character. Lazy, fat and spoilt, he didn't really inspire much in the way of compassion. I'd like to say that changed in the book, but it didn't quite get there. His character development was certainly well conceived, but perhaps a little too slow, or with too much yo-yoing.

The supporting cast were wide and varied. Those that I had initially dismissed ended up playing pivotal roles and were key players in the way the story unfolded. Others who seemed to play important parts were brushed aside with little concern. It was a little unsettling.

If you like war strategy or books on war formations and the like, you might enjoy this one. I found the deeply intricate details were a touch too much and had begun to feel as if I were reading a non-fiction book on war in Ancient Rome.

Aside from Sumto's need to delve into internal dialogue fairly frequently, I found the story progressed along a reasonable storyline and timeframe.

All up, this book took me about a month to read, it was not because I didn't enjoy it. It is a great book, but it needs the reader to be in a certain frame of mind to really get into it.

**Note: I was provided with an electronic version of this book in return for an honest review.**