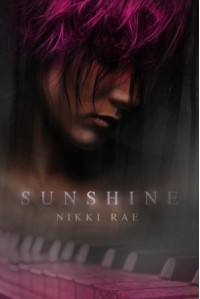 Sunshine reminded me a little of Twilight. The kinda socially awkward guy (who happens to be a vampire) falls in love with the slightly damaged girl (who happens to be human). The similarities were frequent, but fairly light. It was good that I didn't have a picture of Myles in my head that could have been interchangeable with Edward Cullen, but it was a little close.

Sophie (Sunshine) was kinda annoying. She puked ALL the time! She was weak and frail, she was kind of stupid and, while I can understand and forgive her for a lot of her failings (thanks to a rather disturbing childhood and recent events) I just couldn't get past the almost constant need to vomit. It made me think of someone who was allergic to everything and their reaction to everything was to vomit. While some stomach knots and upset guts would have been completely normal, in fact, quite expected, every freaking time she had something happen? I think not!

Her proclivity to puke aside, she's meant to be 18 years old, yet her mental age more closely resembled that of a 15-16 year old. Her emotional swings were a classic example of young teen girl coming into her early years of womanhood. Completely psychotic one instant, and serene and calm the next. I thought that this was quite realistic, but it didn't quite fit the age bracket. I'm not sure why the age was bumped up, generally speaking, the story would probably be better suited to a slightly younger protagonist.

The good characters included Jade (the gay brother) and his partner Stevie. I adored them and felt they offered the stability in Sophie's life that she needed and wasn't getting from her parents. I adored her youngest sister, she played a great role in bringing joy to some darker scenes. However, I didn't think the relationship with her closest sister was quite right, it seemed to head into interesting territory, but then backed away and almost blended into the background. This was a let down.

As I've shelved this as Young Adult, and it pretty much is, I should mention that there are some rather dark themes that reoccur in the book. Rape and child abuse are hinted at and in some instances, strongly revisited. This could cause issues for young readers, but most other aspects of the book could easily be suitable for a young teen. It may too be cause for trigger warnings to potential older readers as it does crop up kinda frequently. It's certainly not too explicit, but it might be enough to upset some.

There are a lot of unanswered question, but given this is part of a series, that's to be expected. It leaves the story in a natural lull after a lot of excitement and adventure, but gives enough information to the reader to show that there will be more fun and excitement in the next book.

If you enjoy vampire books, young adult genre and don't mind a young, silly female protagonist you might really enjoy this book.

**Note: I was provided with an electronic version of this book in return for an honest review**