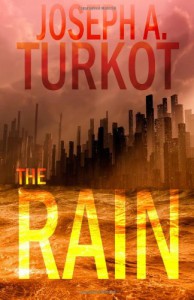 Given we’re heading into the winter months here in Australia; I could certainly picture what the world Joseph created in 'The Rain' would be like. Imagine, though, what it would be like if it didn't stop raining for a month, or a year? Sounds positively horrible doesn't it?

Well, what if it didn't stop raining - EVER?! Comprehending the amount of water that we're talking about here is almost impossible. I ended up thinking along the lines of the Kevin Costner movie - Waterworld.

The scene is set, and you're introduced to your main characters, Tanner and Russell.

At first, I thought there might be something 'dodgy' going on with that relationship, given the whole 'the world is going to hell in a hand basket' but I'm happy to say, my initial thoughts were wrong. At least about Russell.

Age is an interesting concept. In the story, age is simultaneously important and not important. People don't seem to know/share their ages with people. Tanner herself doesn't seem to know just how old she is nor how old Russell is, yet she uses her own and Russell's ages as measuring sticks for other characters she meets. Neatly done by Joseph, to allow for people of a wider age bracket to enjoy.

This story will probably not end up with a massive following; this is not because it's not well written. In fact I thoroughly enjoyed it and its lack of grammar/spelling issues (there were a few minor ones pointed out below), but primarily because of a few themes/subjects that run throughout the book:

1. It is written mostly as a narrative about the past, with only a small amount of the book in the here-and-now with Tanner and Russell.

2. It has aspects of horror/gore

4. It doesn't shy away from some hard truths about human nature

5. Joseph is also not shy about exploring those truths about human nature in some rather interesting detail.

All these points will impact potential readers, but for those who push through them, they'll likely come out the other side with a mind full of possibilities.

Just how much would you have to go through before you gave up all that it means to be a human?

I intend on reading the rest of the series. I hope there are some more happy moments for the characters, but I fear that Joseph may make their journey fraught with danger, death and destruction.

Some things I noticed (sorry no % locations as it was part of a collection):

That's what they'll have to(o), if they're not dead.

Chapter 11: I pull the pull the (remove second pull the) flap of blanket...

...tinkering with (the) radio again.

**Note: I was provided with an electronic copy of this book in return for an honest review.**